Data shows the Bitcoin mining hashrate seems to have hit a phase of stagnation over the past couple of months after riding a continuous uptrend since last July.

Bitcoin Mining Hashrate Has Stagnated In The Last Two Months

As per the latest weekly report from Arcane Research, the BTC mining hashrate looks to have ended its uptrend that started in July of 2021 as it has moved sideways in the past two months.

The “mining hashrate” is an indicator that measures the total amount of computing power present on the Bitcoin network.

When the value of this metric rises, it means miners are connecting more rigs to the blockchain, or new miners are joining in. Generally, higher the hashrate, better is the performance of the network.

On the other hand, a downtrend in the indicator suggests miners are disconnecting their machines as they look to exit the business.

This kind of trend can mean mining margins have gone down so it’s no longer profitable to keep the rigs running for the Bitcoin miners in high electricity cost regions.

Now, here is a chart that shows the trend in the Bitcoin mining hashrate over the past year:

As you can see in the above graph, the Bitcoin hashrate had been observing a constant increase following the July of last year, up until two months ago.

In 2022 especially the indicator saw a rapid increase and set a new all-time high (ATH). However, over the past two months, the rise has stopped and the hashrate has stagnated in value.

Related Reading | Taro, Issue & Send Any Asset Through Bitcoin’s Lightning Network. Do We Need It?

The report notes that a possible reason behind this trend could be the ongoing supply-chain issues, which would make it harder for miners to build new mining farms and get new rigs.

As the hashrate is still around ATH values, the Bitcoin mining difficulty is also sitting at all-time highs at the moment. This is because more is the computing power connected to the network, higher is the competition among miners to hash the transactions.

At the time of writing, Bitcoin’s price floats around $43.6k, down 8% in the last seven days. Over the past month, the crypto looks to have accumulated 13% in gains.

The below chart shows the trend in the price of the coin over the last five days. 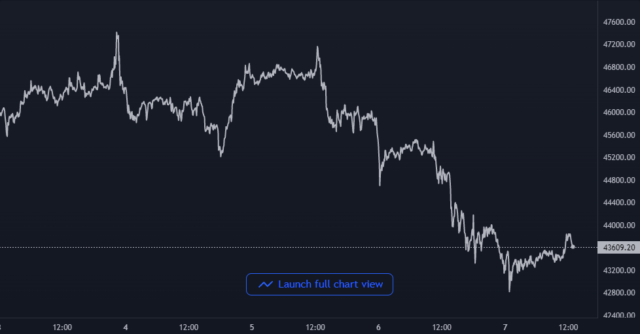 Blockchain-based subscription startup Revuto is expanding its staking pools to eight, allowing Cardano users to have an opportunity to participate in the newly launched ISPO, a fundraising mechanism that allows delegators of a Proof-of-Stake (PoS) […]

The current trend of the Bitcoin realized cap has formed a pattern that has historically been a bullish signal for the crypto’s price. Bitcoin Realized Cap 30-Day Rate Of Change Has Turned Positive As pointed […]

As more people and businesses shift towards digital assets, the cryptocurrency space is gaining more popularity. The increasing number of new crypto enthusiasts is skyrocketing daily. More people and brands move into the industry with […]